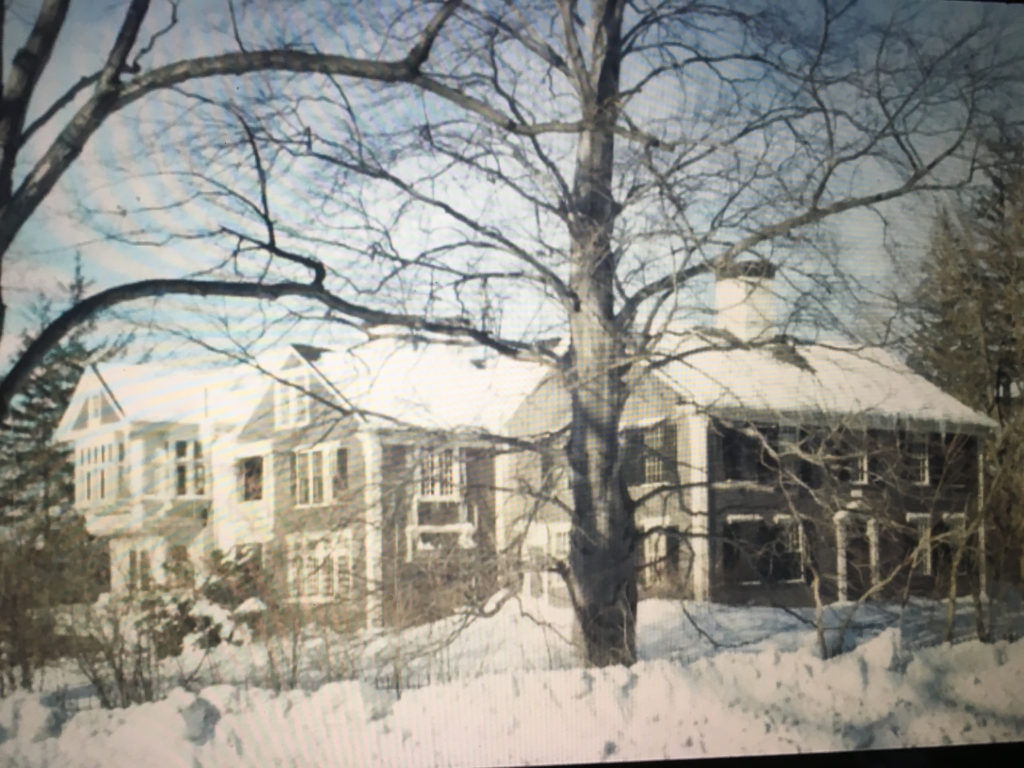 The Lawrence Homestead circa 1968

In the late 1960’s my father, Anthony Hars, was working as an Architect for the famed Boston Architect, James Lawrence, Jr.  In 1967, my parents were expecting their third child and the 800 sf two bedroom cape in Winchester, MA, was bursting at the seams. My father asked James for a raise so they could afford a larger home. Since James couldn’t give my father a raise he suggested that my family move into his family home in Groton, MA, and become the caretakers of The Lawrence Homestead.

Well, as the story goes, my parents viewed the home. My mother saw the potential and fell in love with it. My father, on the other hand, was quite taken aback. He marched right into James Lawrence’s office and said: “No Way! No How!”.

Even though no one lived in the home for many years, James thought it was in decent shape. He was insulted by my father’s comments. That day, he personally drove from Boston to Groton to inspect the house and when he came back he was flabbergasted. The house was in shambles, beer cans and cigarettes were littered in some of the rooms, the utilities were shot. Insulation? What is that? Horsehair plaster of course! The heat was almost nonexistent and raccoons and other varmints were the tenants.

After many discussions, they finally struck a deal. In exchange for being the caretakers and overseeing the restorations of The Lawrence Homestead located at 44 Farmer’s Row, Groton, MA, my father would be able to purchase two acres of land on what was known as West Groton Road to build his contemporary dream house. This was no ordinary feat since the land had been in the Lawrence family since 1860. James Jr and his father James III felt the home needed a family, and we were it. 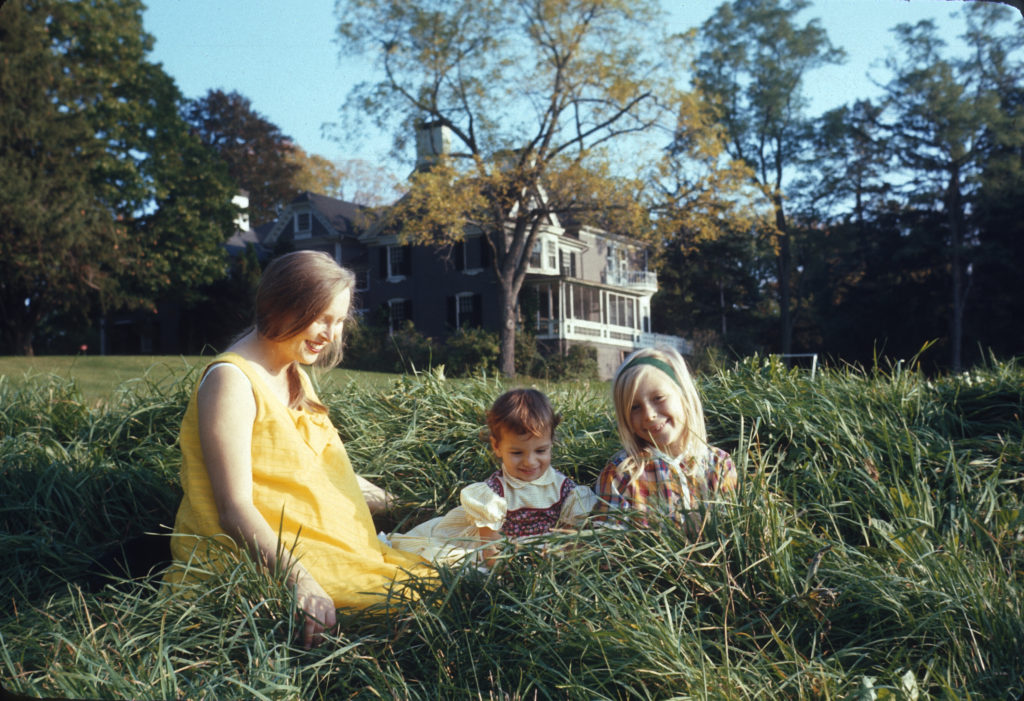 A lazy Autumn afternoon, Lawrence Homestead, Groton, MA circa 1967. My mom, me and my sister Adele. 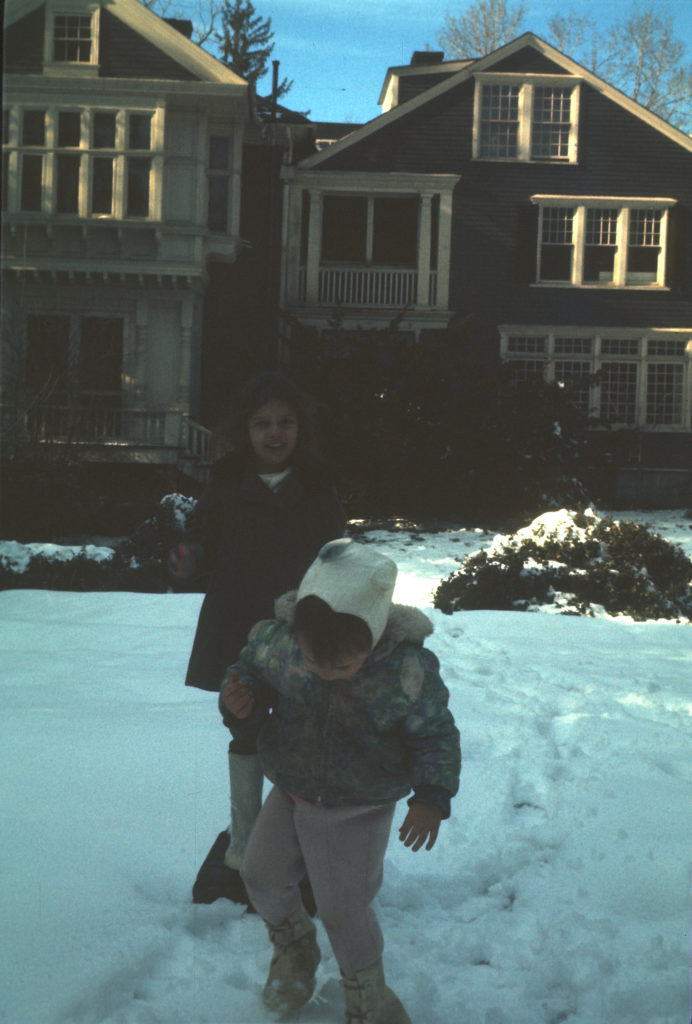 My sister Eve and I enjoying the snow at the Lawrence Homestead, Groton, MA, circa 1971

On July 4, 1967, we moved into the 13,000+ sf, 40 room mansion, I was just 2.5 years old. The winter of 1967-1968, was one of the worst on record, and the only room in the entire home which was warm was the South facing Playroom on the second story above the dining room (right of the sleeping porch in the above photograph). We weathered the storm. 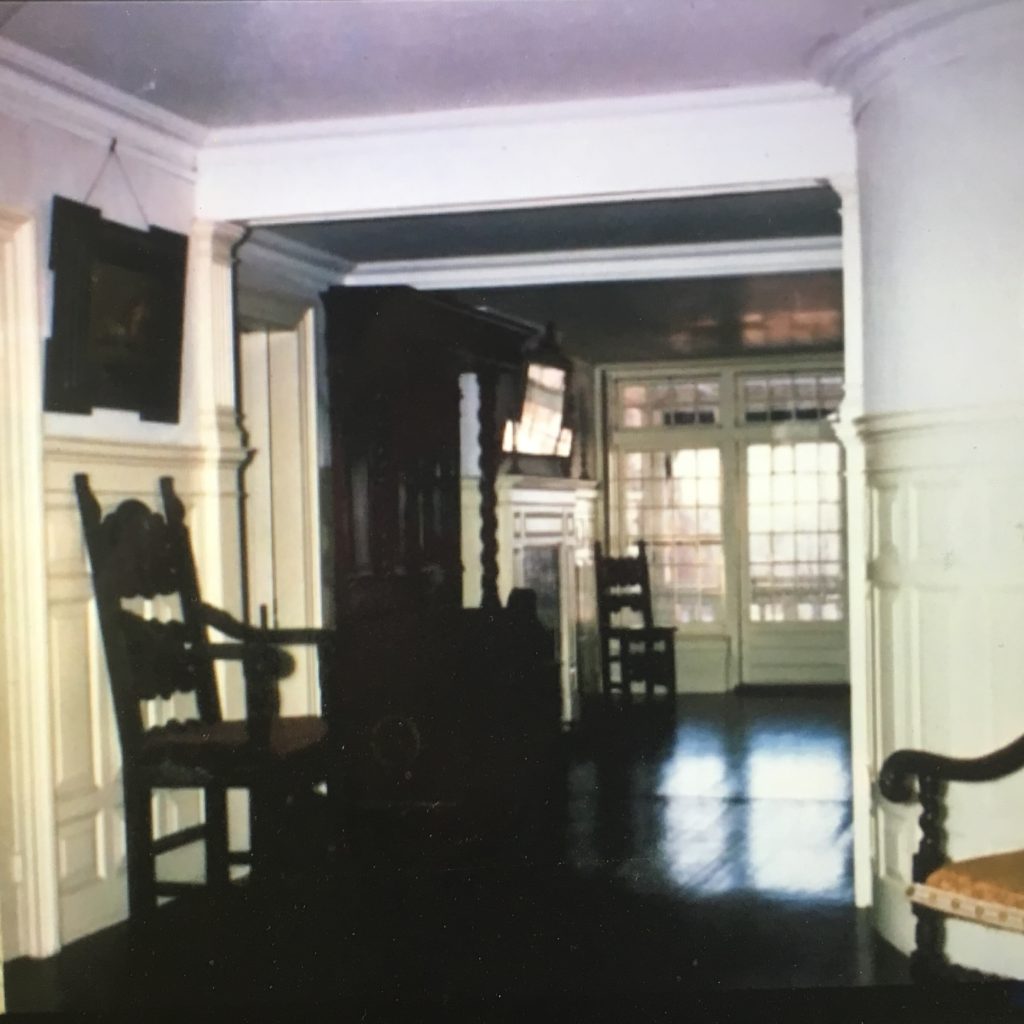 The main hall front stairs and back porch were on the first floor of the Victorian section.

Slowly but surely the house was put back together. I remember helping my mom wallpaper the dining room. It was a two-tone red and velvet striped wallpaper (see picture below). My mom mixed the paste and applied the wallpaper with a brush. Funny how the smell of paste still lingers in my mind. It was a sunny room with windows facing south. The tray ceiling was interesting with detailed moldings. I would lie on the floor and imagine walking on the ceiling upside down. 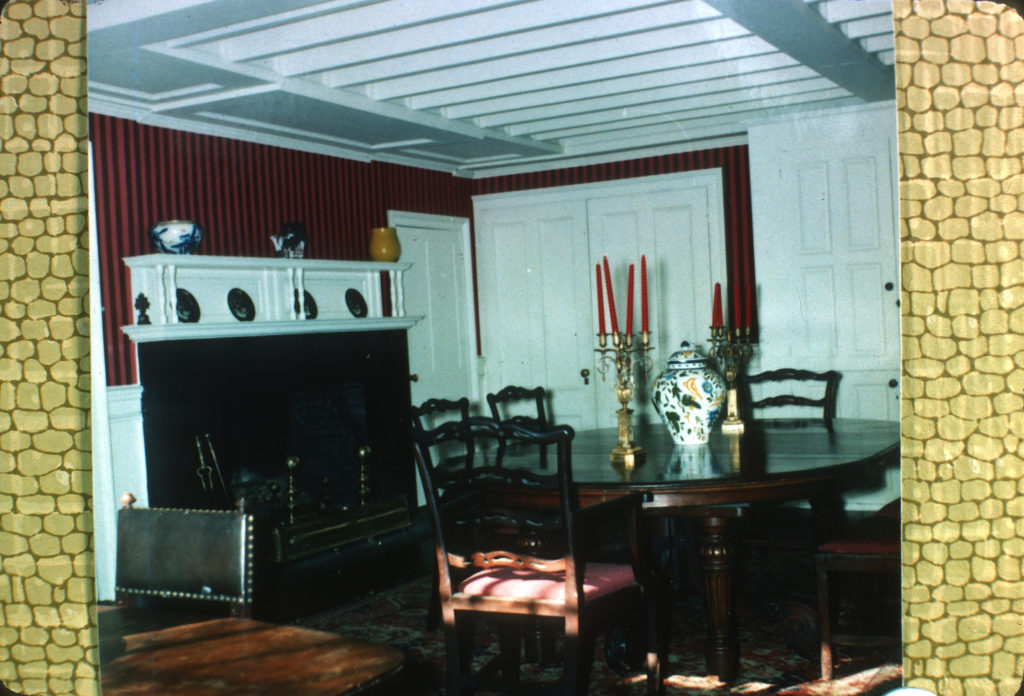 The formal dining room at the Grey House aka The Lawrence Homestead circa 1970.

One of the interesting details of the dining room was the Safe. Behind a wooden door was a massive steel door with a combination lock. We envisioned heaps of gold and silver coins hidden inside. I remember one evening, one of my father’s friends, with his ear against the combination unlocked it. As the heavy steel door opened, we held our breath in anticipation. We were sorely disappointed, however, only to find a few odds and ends of silverware.

Over the years my parents restored the home. They converted rooms into apartments and rented to military families from Fort Devens. It was a long process, but thanks in part to my parents the Lawrence Homestead is what it is today.

What a wonderful home to grow up in. Our creativity grew out from our time here. It was an amazing experience. Wandering the halls, putting on plays in the Master Bedroom with large burgundy velvet curtains that hung from the 12′ ceilings draping the floor. It was an honor to live there and enjoy the home and the grounds. Even to this day, I have dreams that are so real about the details of the home.

In future blogs, I will share my experiences of growing up in a historic home. 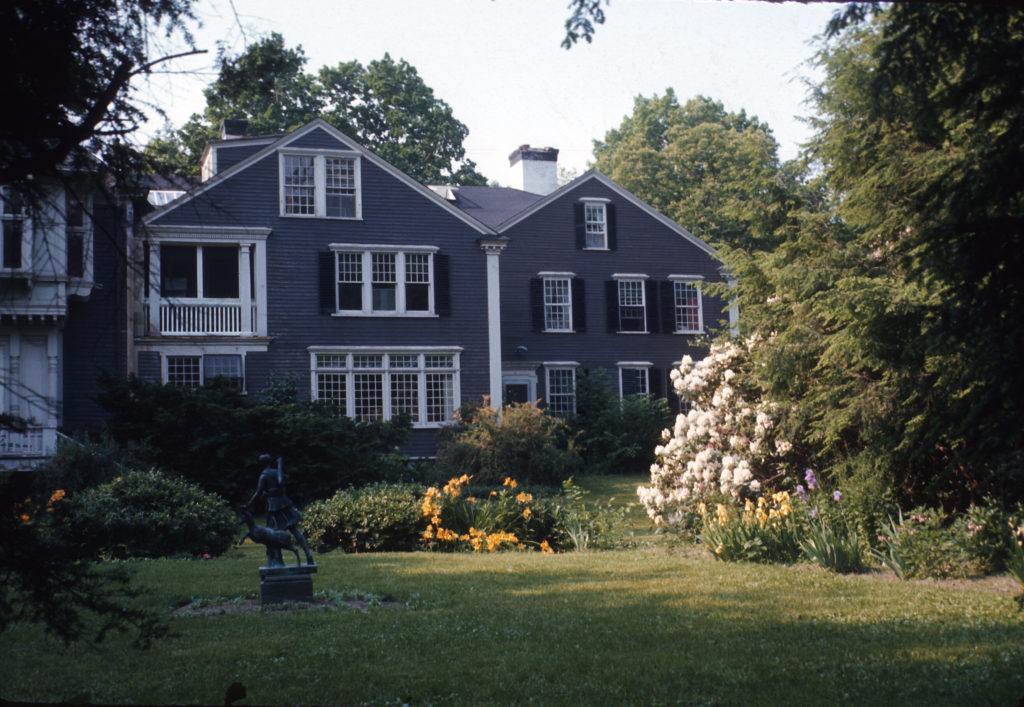 The famous Landscape Architect, Olmsted, designed the grounds. He had a gift of understanding how trees, bushes, and other plants would look when they reached maturity. Lawrence Homestead, Groton, MA